You’re going to find this weird, but I watched ‘Twilight’ But it showed up on Netflix last week, so I thought, “Oh. That thing that everyone was talking about a few years ago.”

Being in the world. Popular culture. Knowing what people are talking about. Listening to the stories that people identify with. All that stuff.

Synopsis: a guy vampire, Edward, and human girl, Bella, who go to the same high school develop extremely (supernaturally?) strong romantic feelings for each other. Edward is wildly fixated on Bella and all the while fighting back his own savage vampire urges to kill her for food. For some reason, Bella is especially tasty as vampire food, and Edward has to try extra hard not to eat her. Meanwhile, other vampires want to eat her too, and he protects her from them while holding at bay his own instinct to kill/eat her. Roll credits.

So, what did I think? What did I think about the movie/book/story that sent millions of young girls into raptures of ecstasy and millions of women between ages 18 and 59 into paroxysms of guilty vicarious pseudo-nostalgic euphoria? And probably a lot of guys too? First an aside.

I’ll admit. The main reason I saw this movie is because somewhere once I heard a talk-show preacher talking about it. He labored to parse out, to elucidate what was the nature of the magic of that film that affected so many. He opined, with the breathless wizardry of an O’Connor-esque southern prophet, that it was about how Edward was SO INTENSELY FOC– USED on his human inamorata Bella, and this reveals the deep psychology of how every woman longs to be desired like that by her man. And you men out there need to cherish your women so they feel loved like Bella did. Everything about this guy’s message made my skin crawl, but I wasn’t sure why at the time. Perhaps because I had not seen the movie.

So. My response to the film? I was expecting the worst and was all prepared to hate it just for being this big teen sensation. But ya know what? For a vampire movie, it was pretty good, I thought. 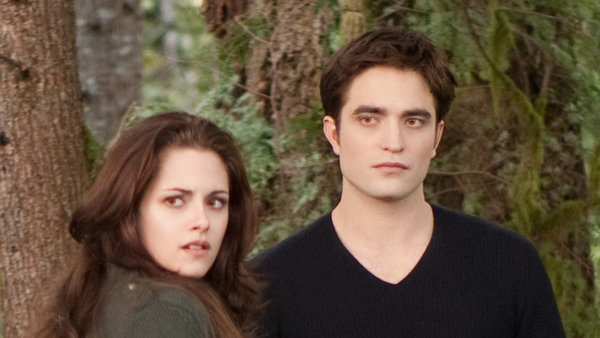 Edward was pretty cool, I guess. The tortured, noble vampire from whom all strength of will is required to keep from making a bloody wreck of his beloved Bella.

And Kristen Stewart. Despite how much abuse she has taken from the celebrity gossipers and internet haters, I thought she was pretty good in the film. I’ll admit that I think her dark-circled eyes, her taut little mouth, and her dark hair are very successfully melancholy, and I like that.

OK, so she’s not Cathrine Zeta-Jones, big deal! Why so do many people hate her? I don’t get it. But whatever. Let’s move on.

The film had a cool, wet, evergreen, overcast Seattle vibe. The colors were muted and blueish. And pretty much all the humans were good characters. The vampires however were a ridiculous failure, all walking around with their eyes extra wide open, all looking at each other with sidelong knowing glances, all a little too cliche’ goth-looking. But I suspended disbelief.

The so-called magic of the film, the recipe that made girls and women so captivated was not, as Mr. Clueless Pastor tried to explain in a tiresome play to cultural relevance before his bewildered sheep-flock, that Edward was giving Bella the kind of intense attention that every woman longs for in a relationship, and which men are now challenged to provide.

Edward and Bella’s attraction was anything but realistic, anything but a model for the rest of us. Sure, we’re all fools in love, as they say. But we’re not all obsessive.

In fact, back in the 90’s Edward and Bella’s hyperactive attraction used to be known to psychologists as “codependency” (maybe it still is) and was a condition for which a person should seek counseling. Are we saying now what used to be clearly unhealthy is the new gold standard, the unattainable perfection, the crack-cocaine of romantic feelings?

And not to put to fine a point on it, is this pastor’s observation and prescription more a capitulation to the ever-increasing-ism of the last so-many decades (harder louder music, intenser movies, bigger explosions, fatter muscles, smaller bikinis, taller skyscrapers, extremer sports, sharper graphics, faster communications, double-down super-sized Dub-step-and-Red Bull-infused Nutella wrapped-in-bacon culture) than sane counsel to lovers about what to expect from life?

Or maybe this whole thing isn’t so new. After all, romance stories have been creating hot&sweet, gladiator-pecs, boom-shicka-wow-wow, unfulfillable longings and dissatisfaction with real life for many decades. But those Harlequin books were never set up by the sages and teachers of society as instructive.

My advice: watch movies you like and enjoy the art. Escape for a while in a good story. And then forget about it and go build a birdhouse or something.